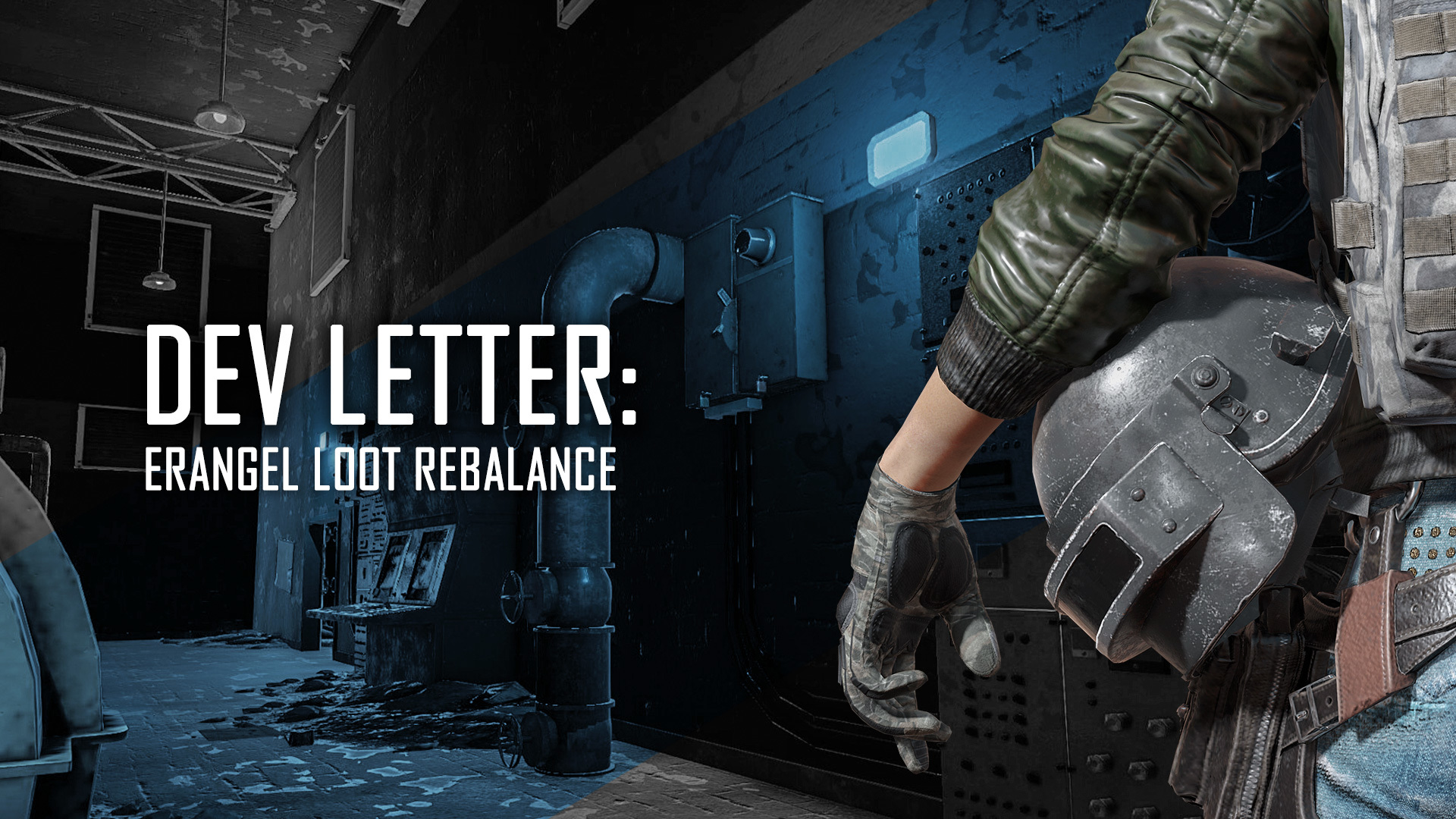 Two years ago, we introduced the world to Erangel, the first map released for PLAYERUNKNOWN’S BATTLEGROUNDS and for many their very first Battle Royale map experience. Since then, we’ve continued to evolve our game and release new maps, leaving Erangel somewhere between the core PUBG experience and slightly outdated. Knowing this, we’ve been constantly collecting and analyzing your feedback, especially when it comes to loot and spawn speed issues. After serious consideration of all these factors, we made the decision to remaster Erangel. We understand that this task will be challenging. It won’t be an easy task to somehow bring Erangel to the visual and tactical fidelity of more recent maps, while preserving the magic and nostalgia that made Erangel and PUBG popular in the first place. That’s exactly why we want to improve and test it together with our players.

A project like this requires an enormous amount of effort and is realized in phases of several months. During the project, we will release portions of the overall remaster for testing and feedback as we finalize and apply the changes. For the first step in such a massive change, we’ll first adjust Erangel’s loot and spawn rates, which we plan to apply to the test server tomorrow. Today we want to share the direction and intent of these changes to loot.

As mentioned above, a project like this will take time, testing and iteration. We would like to emphasize that none of these phases deployed for public testing are considered final until applied to live servers. Likewise, all tests, impressions, leaks and data mining must be taken in the context of being one piece of a whole puzzle. Each test is accompanied by player feedback and internal data, so keep an eye out for official communication regarding the status of Erangel tests.

Our main goal with item spawn rates in PUBG is to balance the chaos of trying to survive in extreme conditions with the fun of having the weapons players want to use. To increase the chaos portion of this objective, PUBG’s spawn system is completely random, taking it from a main table that distributes the loot differently in each game. Since it was our first map, Erangel was designed to be highly random with a slower spawn rate.

As time went on and new maps came out, play patterns also started to evolve and progress from the early days of PUBG. This led to Erangel’s old loot system becoming much more noticeable. As community feedback on this topic grew around the world, the development team began efforts to resolve the issue.

As you can see in the chart below, the spawn rate in Erangel in general has steadily increased between Early Access and Now. In April 2018, even after the patch to exclude garments from the map, we continued to add new items and attachments to increase the spawn rate. However, as the new map trends continued, we started to consider much more serious changes.

We also ran item retrieval experience tests with professional teams in esports mode to see if we could solve the balance problem by simply adjusting the spawn rate. We thought running the test in esports mode instead of normal mode would be much more effective when testing the impact of spawn speed adjustments, as esports mode has higher item spawn settings.

The test covered 15 areas and studied the efficacy of loot. Basically, we wanted to see what percentage of the loot was collected versus left behind. The actual retrieval rate of items in all areas was 67.85%, leading to the conclusion that nearly 33% of the items spawned were unnecessary or duplicate spawn items. More telling is the fact that a specific area had a loot efficiency of only 19.7%.

This test helped us realize that we needed to increase the value of the items and balance the loot in areas where users couldn’t find good items compared to the importance and scale of the area they were in. We also tested the loot without taking into account the popularity of different areas.

In addition, we analyzed the types of items that can be looted in key areas on the map, identified the characteristics of each area, and analyzed players’ preferred play patterns, including players’ preference for which areas to balance loot for.

We could see that there was a distinct difference in item acquisition rate for each area on Erangel, and decided we also needed to balance the loot so that it’s evenly distributed across the map.

Sanhok was an important point of comparison for players when talking about Erangel’s spawn speed, and featured smaller scale, lots of loot, and faster combat. Many players wanted a similar experience and loot balance on Erangel.

Actual data around this comparison shows that ARs are 4.75%, DMRs 0.69% and SRs 0.26% on Sanhok, but 2%, 0.48% and 0.12% on Erangel respectively, showing that AR – and SR ratios in Erangel are relatively low, especially given the difference in map size. We felt that Erangel represented our original Battle Royale experience, as the spawn rate of magazines, pistols, and grenades is high, while the spawn rate of key items on Erangel is low. 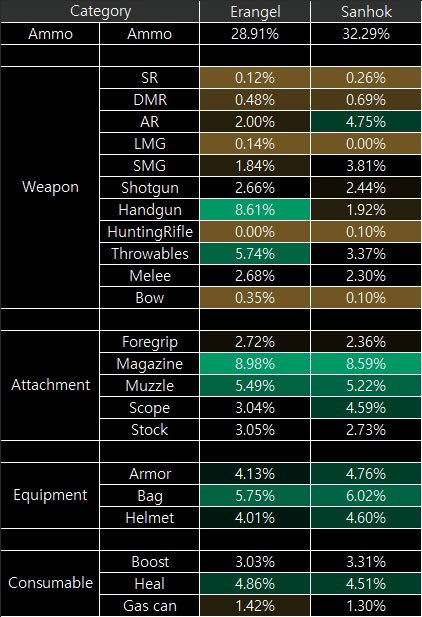 For the upcoming test, we decided to make Erangel’s spawn speed a little more bold, reducing the number of spawn guns, magazines, and grenades, while increasing the number of weapons and gear that play an important role in gameplay by about 10 increased. -20%. In addition, we will adjust the number of item spawns per item category to a ratio similar to Sanhok’s. While it could be a big change, we want to adjust the amount of spawn to make us feel better while retaining Erangel’s unique features. The goal is to prevent Erangel from being seen as a greater Sanhok.

If we all put Erangel together, players will have inconsistent item retrieval experiences as the map doesn’t offer loot balance in every area. In this regard, we are already aware that this is not the only way to fix a fundamental problem in Erangel, but we plan to incrementally adjust the spawn rate/spawn amount to ‘consistently to provide gameplay experiences in acquiring items and to highlight its unique features. of the map’.

We look forward to your feedback on these changes, but we also know that more needs to be done. For example, more work needs to be done to distribute the loot across the different points of the map. Players will notice a small loot gap between some locations, but overall the early game looting should be better and get gear faster and easier. Please know that this is the first test, so the content of this update is not fixed. We need your feedback to replicate the changes and hope we can find the right balance for Erangel together.

As we mentioned before, the spawn rate balance itself can’t completely solve the Erangel problem, so we’ll keep changing/adjusting various elements as the test progresses. For example, if this increased spawn rate increases the frequency of early battles, the midgame could suffer due to fewer players in a larger safe zone. Of course we will keep an eye on how the playing time and playing style are affected and adjust where necessary.

This is a very personal project for us here at PUBG. Our goal, as always, is to create the best realistic Battle Royale game on the market. Remastering the map that started this amazing journey is our renewed commitment to that goal. As always, we thank you for taking the time to send us your feedback and look forward to hearing your thoughts on the upcoming changes to Erangel.